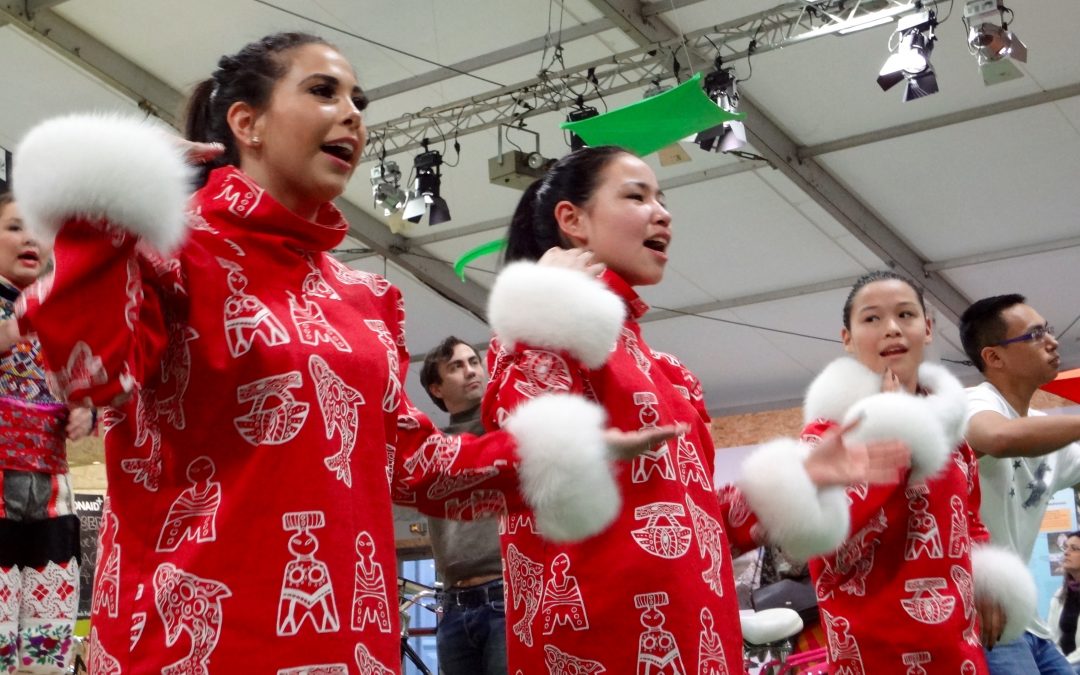 December 8 was a big day for the Arctic at COP 21. Saami and Inuit leaders gathered at the Indigenous Pavilion to celebrate and caution delegates about the needs of their region.

Cathy Towtongie, President of Nunavut Tunngavik, the beneficiaries of the Nunavut Land Claims Agreement, is a traditional seamstress whose elders taught her the ancient methods of clothes-making and are no longer alive. She described how she can see climate change in the animals. On caribou pelts, she can see the frailty of the muscle fibres from environmental stress. She said the warmer temperatures mean that she cannot find a parasite-free river in which to wash the hides. Birds they’ve never seen before are migrating to the Arctic.

“This is not a textbook for us,” Towtongie said, “this is our way of life.” 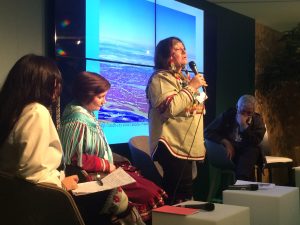 Towtongie speaks to the crowd about changing climate and changing ways.

Towtongie was part of a panel of speakers sharing the intimate ways in which climate change is affecting the everyday lives of the people of the Arctic. Their panel was accompanied by the Premier of Nunavut Peter Taptuna, and the Minister of Finance and Domestic Affairs for Greenland, Vittus Qujaukitsoq.

What forest is to many indigenous groups so snow is for the Inuit and Saami, and it is changing fast, they explained. The ice and permafrost melt is literally changing the ground beneath their feet.

Ancient hunting paths are thinning so rapidly they can’t hunt safely in some places. As storms increase in frequency and size, even their impressively accurate traditional knowledge can no longer predict the weather patterns.

Saami artist Sofia Jannok introduced the panel of speakers with sound and stories of the Saami reality. If anyone wants to know how to best sustain the reindeer herds alongside energy projects, they must ask their herders, the Saami people, she said.

Describing the custom of leaving a bit of coffee in one’s cup to return it to the earth, she explained how her culture is not one to take everything. Through respect for the earth’s bounty, they ensure their future survival.

Towtongie, described the laws in place in Nunavut that fine the wasting of polar bear meat. Everything is used.

Traditional knowledge also means effective, cooperative forms of government. For a people that have learned to adapt and survive at fifty below centigrade temperatures for thousands of years, it is no wonder they are masters at listening and partnership.

Áile Jávo, President of the Saami Council echoed this by saying, “to survive in the Arctic you have to have a pretty advanced culture.”

Like the global south, the peoples of the Arctic are suffering disproportionately from unsustainable fossil fuel development.

Maatalii Okalik of the Inuit Youth Council addressed the need for indigenous human rights language in in the COP 21 text. She called for recognition by the international community of the human caused impacts from climate change on people, wildlife, and the ecology.

Premier of Nunavut Peter Taptuna expressed the need for assistance in adaptation and climate mitigation. “The task is so great, and resources so few,” the Premier said they can almost consider the region a developing area. Yet, their needs are not equated as such because they exist within eight wealthy northern nations.

Taking the future back

“Despite all odds,” Eegeesiak said, “we are still here”

The Arctic seems to face two oscillating extremes. Either it is ignored all together as a region, or it becomes the emotional symbol for all of humanity. Neither representation offers substantive help or solutions. 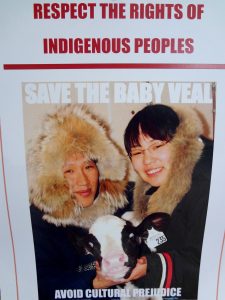 Inuit Circumpolar Chair Okalik Eegeesiak used this poster to tell the room, “Stop using the polar bear as an icon for climate change. This does not help us address the very real human dimension.”

Eegesiak presented a poster of Inuit women standing beside a baby cow that reads, “Respect the rights of Indigenous Peoples: Save the Baby Veal, Avoid Cultural Prejudice.” She told the room, “Stop using the polar bear as an icon for climate change. This does not help us address the very real human dimension.” She concluded, “Same with the seals.”

Passive victims the Inuit and Sami certainly are not. Thanks to hard work and organizing as a region and with allies from other indigenous supporters, they are making progress.

Minister Catherine McKenna announced last Sunday a commitment to 1.5 degree warming, a figure indigenous groups alongside other vulnerable groups such as small island states have been pushing for, even though that temperature already consigns them to dramatic change. As Premier Taptuna explained, temperatures are amplified by a factor of three in the Arctic. Eegeesiak also noted the commitment of Canada to press for the inclusion of indigenous rights in the text of COP 21, as a welcomed improvement.

“We now need [all] countries to make certain that the rights of indigenous language is reinstated in the text,” Eegeesiak said. “A preamble is nice but it is not legally binding.”

The ICC, representing 155,000 Inuit in Chukotka, Alaska, Canada, and Greenland, have or are in the process of producing numerous summits and declarations on matters from sovereignty to wildlife to mental health.

As Áile Jávo, President of the Saami Council explained, her people have their own parliaments in three of their four national governments, which include Norway, Sweden, Russia, and Finland. Their people are represented at COP 21.

Jávo said she hopes one day her people can move beyond basic rights and towards their own governance. Nonetheless, she said, their participation on the Arctic Council is proof that the recognition of rights and cooperation are possible at an international level, and can lead the rest of the UN states by example.

The Arctic youth are equally strong and organized, as demonstrated by Maatalii Okalik. She spoke eloquently about how her connection to land and her elders, known as knowledge keepers, makes her a better person. “My people are experts on land and conservation,” she said. “We want to determine for ourselves our social economic and political way of life.

Considering the median age of Canadian Inuit is 22, the world can expect more leadership to follow. As Reggie Joule, Mayor of the Northwest Borough in Alaska said, “It is our nature to survive.” 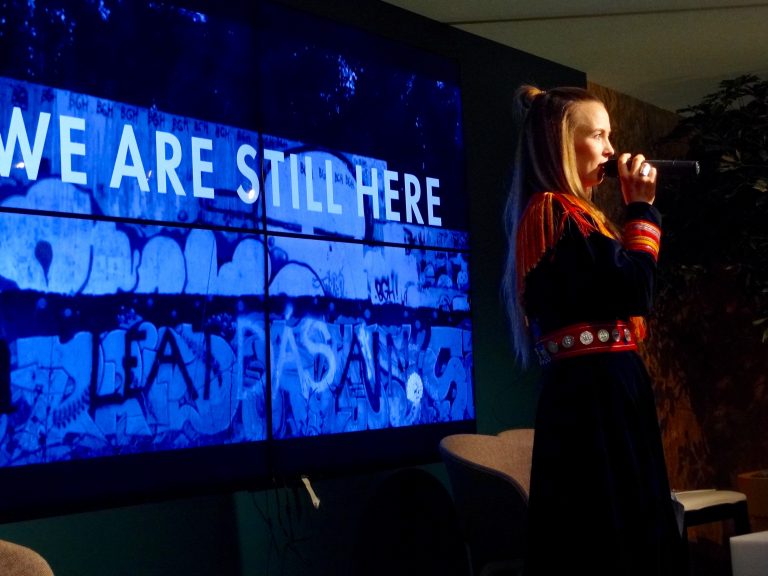