How media covered COP 21 and the Arctic

For the past two weeks global attentions have been focused on Paris, where delegates from nearly 200 countries convened to hash out an agreement to curb climate change.

For the nearly 4 million people who live across the Arctic, the meeting had an extra sense of urgency. Climate change is already leaving its mark on the region, affecting everything from its landscapes to its wildlife to the health and lifestyles of its indigenous people.

To make matters worse, climate scientists believe that the region’s climate is disproportionately baring the brunt of a warming world. According to the Intergovernmental Panel on Climate Change, over the past 100 years, average temperatures in the Arctic have increased almost twice as much as in the rest of the world, and some models suggest that this could only get worse in the future.

So when Arctic leaders and scientists traveled to Paris, they hoped the world would commit to slowing down climate change everywhere, but especially in the Arctic.

But the final agreement reached by delegates on Saturday had no specific mention of the Arctic.

While we don’t know the reasons behind this omission , the small number of tweets about COP 21 that mentioned the Arctic suggest that the Arctic was not high on social media radar. If this is the case, there might by something to say about the role that news media played in this matter.

The Arctic Journalism team at UBC’s Graduate School of Journalism analyzed how journalists around the world talked about the Arctic in the context of COP 21.

We focused on 10 media outlets: three were international (The Wall Street Journal, The New York Times and The Guardian), four were national Canadian news sources (The Globe and Mail, Toronto Star, CBC News, and National Post), and three were regional news outlets from northern Canada (Whitehorse Star, Northern Journal and Nunatsiaq News). We focused on articles published between Nov. 28 to Dec. 12., and searched for articles that discussed the Arctic (or the Canadian North) in the context of COP 21.

In total, 61 articles mentioned both the Arctic and COP 21. Of these, only 60.7 percent, or 37, focused specifically on the Arctic. That’s an average of .24 articles per news source per day of coverage on one of the regions which is most directly affected by climate change. 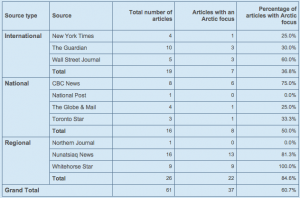 Most articles about COP 21 that focused on the Arctic were from regional news sources from the Canadian North. 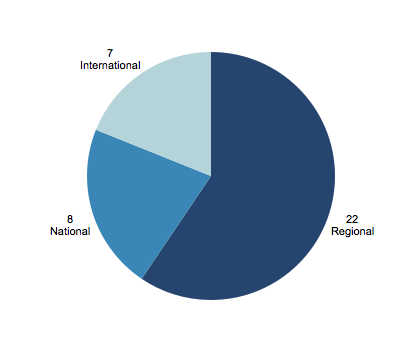 Welcome to the Arctic. Population: 0

On Nov. 24, just a few days before COP 21 officially started in Paris, YouTube tweeted out an image of a polar bear on a shrinking patch of sea ice. Although the tweet was retweeted over 600 times, it had one tragic flaw: it got the region’s population wrong by 4 million people.

Although it’s clear that YouTube is not a news source, I mention the tweet because it’s a reflection of a bigger issue. In international media, Arctic communities were rarely mentioned or quoted.

And the situation was worse in national Canadian news sources.

Except for the CBC, none of the three other news sources mentioned or quoted Arctic communities, which is especially problematic, since roughly 100,000 people live in the Canadian Arctic, which also makes up 40% of the country’s landmass. 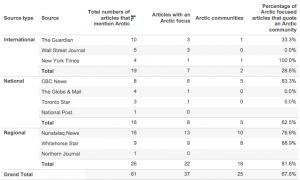 So who did get quoted?

In terms of who actually did get quoted in Arctic-focused stories, the situation is quite varied.

In terms of the chronological distribution of articles, it seems as though interest for the Arctic during COP21 started off strong, but declined steadily as the meeting dragged on. 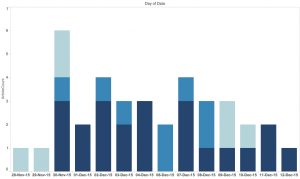 When French Foreign Minister Lauren Fabius announced that the delegates of 196 countries had reached a historic agreement on Saturday, Dec. 12, online commenters around the world jumped to pitch in their opinion on the deal’s final text.

Arctic voices, such as that of Okalik Eegeesiak from the Inuit Circumpolar Council, were clear in their rejection of the deal. Her “Countries failed!” tagline after every message on Twitter is a reflection of the frustration lived by many in the Arctic.

The omission of any Arctic specific language from COP 21’s final agreement means that even if the world does manage to keep global warming “well below 2 C,” the impact on the Arctic will be huge.