The Path to Yellowknife: How a forest fire and a bunch of data informed my reporting 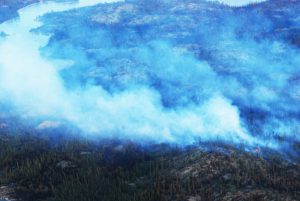 Watching Fire ZF-014 from the sky gave me a different perspective on journalism.

From the safety of a helicopter, Fire ZF-014 looked unimpressive, a monotonous black stain, interrupted only by lakes and the occasional sighting of smoke plumes.

But as the helicopter made its way deeper into the affected area, I began to get a grasp of the fire’s size. The black, smoldering stain, which at mid-August was estimated to be 32,000 hectares, stretched as far as the eye could see.

And then, as the magnitude of the calamity dawned on me, a big, fat question fell on my lap like a giant sack of potatoes. It was a selfish question, but I couldn’t shake it off.

How did I, a student journalist from Argentina, end up in this helicopter, covering one of the biggest blazes of this year’s fire season in the Northwest Territories?

The answer, in its simplest form, is quite concise:

In August of 2015, in-between my first and my second years at UBC’s graduate school of journalism, I was taken on as an intern at EDGE YK, an online news website and free community magazine based out of Yellowknife.

But since things aren’t ever that simple, I can say that the process of getting to Yellowknife had actually started two years earlier, when I lost my job, my house, and all my belongings to another forest fire, many kilometres away, in the heart of Argentina’s Córdoba province.

That event forced me to shift career paths, and—less than a year later—I was on a flight to Vancouver, intent on starting a new life as a journalist.

I joined UBC’s School of Journalism as a graduate student. There, I soon found my way to the Arctic Journalism project, an academic research undertaking devoted to studying how journalists are covering the Arctic in the times of Twitter, climate change, and resource extraction.

There was something alluring about the North, its immensity, its remote communities, its front-line status in the times of climate change.

I set my sights on Yellowknife, and with the guidance of my researching supervisors, I spent months prior pouring over articles, collecting data on how journalists in the Canadian North were writing about Arctic issues. And as that data repository grew and grew, I began to wonder how my findings would inform my personal journalistic practices during my internship.

Would I be writing for a global audience or a local audience? Who should be represented in my articles? What specific issues should I explore? How should I share my articles on social media?

As I flew a couple hundred metres over a raging forest fire in the middle of the vast boreal wilderness, I was trying to process all of these questions, while also trying to decide how I would tell this particular story for the particular news organization I was working for.

In the end, the endless heaps of data I collected over the summer undoubtedly shaped the news stories and feature pieces I wrote during my three weeks in Yellowknife.

It was that information, as well as my conversations with Northern journalists, that gave me the confidence needed to make the most out of my internship, and to feel somewhat safe as I was flying over Fire ZF-014. At least I wasn’t just parachuting in.

Peter Mothe is a graduate student at UBC’s School of Journalism and a Research Assistant on the Arctic Journalism project. You can follow him on Twitter at @petermothe.